Tv stars Shivangi Joshi and Mohsin Khan are one of the most loved duos on the small screen. Their onscreen as well as the offscreen chemistry in the show Yeh Rishta Kya Kehlata Hai won many hearts. While Mohsin played the role of Kartik, Shivangi donned the role of Naira and together they were lovingly called ‘Kaira’ by their fans. Now that the duo has moved on from the long-running show, there have been rumours that the two stars have parted ways, Shivangi and Mohsin were rumoured to have started dating soon after their Jodi became popular. Recently, an article surfaced that claimed that Shivangi is finding it difficult to move on after her alleged breakup with her Yeh Rishta Kya Kehlata Hai co-star.

Quashing the rumours, Shivangi Joshi cleared the air on Thursday. Taking to Instagram, the Balika vadhu actress clarified that she was talking about moving on from her character naira and not any particular person. She also revealed that she had asked to skip a few questions because they were personal. She stated, “I said it’s hard to MOVE ON from my then character Naira and not anyone else.”

Shivangi Joshi said, “The recent article about me has been misleading in many ways. Alot has been mentioned in the article but in an unorganised manner which has changed the totality of the news article and has been duly picked up and again misquoted by various media portals. Just want to say everything is good and happy in my life and for all Kaira fans, here’s announcing Mohsin and my next association very very soon..so stay tuned everyone.” Clarifing about “‘Joshi asked to skip the question'”, she said, “Well yes I did because that interview was not supposed to be a personal one but a feature story on 2nd season of hit shows. It was never meant to be a personal life-based interview and I think the journalist should have respected that, either should not have asked or atleast should not have published ‘asking to skip a question’ bit. Integrity matters in any profession!!” 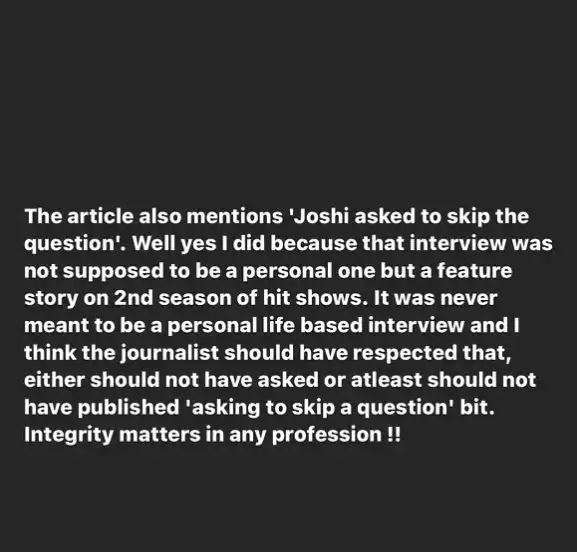 Image Source : INSTAGRAM/KARTIK AARYAN Bhool Bhulaiyaa 2 to Freddy, Kartik Aaryan’s 2022 releases you can’t miss  Bollywood actor Kartik Aaryan, who made an impressive OTT debut with Dhamaka, is all set to entertain the audience with the exciting lineup of films for the year 2022. Interestingly, Kartik is working on five of the most […]

Image Source : TWITTER/FENILKOTHARI Ranveer Singh, Deepika Padukone starrer ’83’ declared tax free in Delhi  Bollywood livewire Ranveer Singh will next be seen playing the role of former Indian cricket captain Kapil Dev in his upcoming film ’83.’ While everyone is super excited about the same, the Kabir Khan directorial has been declared tax-free in the […]