Junglee Pictures and Roy Kapur Films have produced many concept-driven stories that have received acclaim from critics and audiences alike. The powerhouse studios are now getting together to produce a unique comedy-drama story with a very fresh lead pair. Written and directed by Arshad Syed, the film Woh Ladki Hai Kahaan? brings together Taapsee Pannu and Pratik Gandhi for the first time. 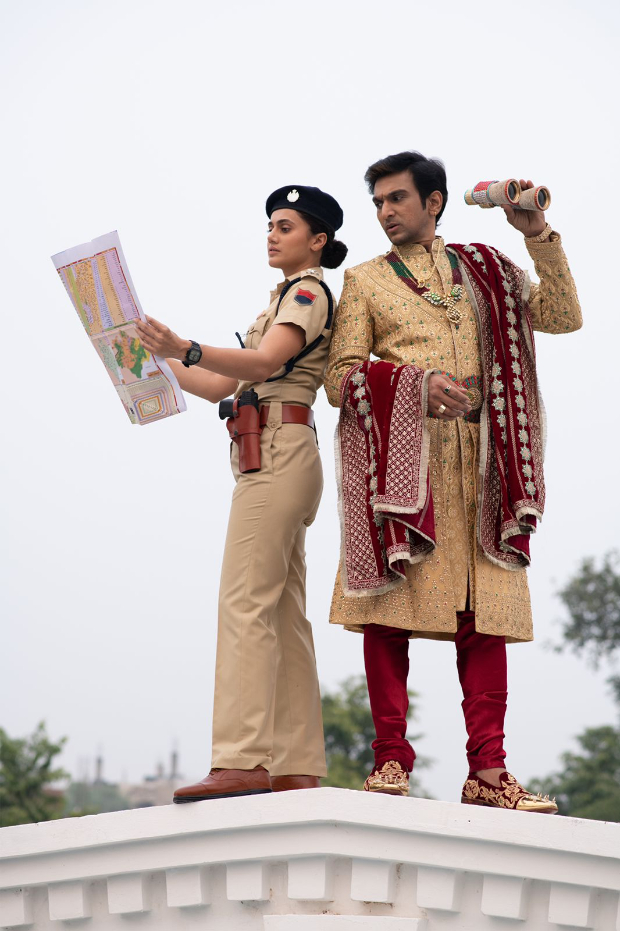 Having made a huge mark with her impactful performances, Taapsee Pannu will be seen playing her first comedy role as a feisty cop. Pratik Gandhi who has earned many accolades for his performance in Scam 1992, will be seen in a very different avatar as the young newly-wedded scion of a ‘Masala’ magnate family. The makers have shared an exciting first look of the actors from the film from their current shooting schedule in Jaipur.

Talking about his collaboration with Junglee Pictures, producer and managing director of Roy Kapur Films Siddharth Roy Kapur shares, “We are happy to collaborate with Junglee Pictures, which has a stellar track record of backing unique and entertaining stories. Their excitement around this story was evident right from their unbridled laughter in Arshad’s script narration, and I look forward to a wonderful association ahead of us.” RKF currently also has the monumental war action drama, Pippa, on the floors in Bengal, amongst numerous other films and series on their upcoming release slate.

With upcoming family entertainer films like Badhaai Do and Doctor G, Junglee Pictures has Woh Ladki Hai Kahaan? as their next one in their release slate. Talking about their collaboration with Roy Kapur Films, Amrita Pandey, CEO, Junglee Pictures, shares, “Arshad has written an intriguing and enjoyable story and we are elated to have collaborated with Roy Kapur Films on this one. Both Taapsee Pannu and Pratik Gandhi have made a huge impact with their work and to have them together in the film is really exciting”

On playing a cop for the first time and sharing her stunning look from the film, Taapsee Pannu shares, “Playing a policewoman and doing a comedy film has always been on my checklist and I am happy that it is finally ticked off. I had seen Pratik’s work and I think he is a very talented actor and I am absolutely enjoying working with him. Arshad has written an amazing script with great comic quirks and also a lot of heart, which I am looking forward to. I am happy that Junglee Pictures and Roy Kapur Films have collaborated to produce this film. It’s going to be a fun ride!”

Playing a role like this for the very first time, Pratik Gandhi is excited to showcase the quirks of his character. Talking about his role and his experience working with this exciting team, Pratik Gandhi shares, “My character in Woh Ladki Hai Kahaan? is very different from anything I have ever done before, and that is very exciting. Taapsee is super talented and I am so thrilled to be working with her. Arshad has a great vision and he has written the story with so much nuance! I am sure the audiences will love it.”

Talking about his directorial debut and bringing his story which is such an interesting team, Arshad Syed shares, “Having a cast of brilliant actors like Taapsee Pannu and Pratik Gandhi has enriched my cinematic journey. The characters they’re essaying are the comic fodder of our film. Sharing the first glimpse of their characters is exciting for the entire team”.

[ad_1] Fresh off of their triple win at the American Music Awards on November 22, the decision whether or not the members of South Korean juggernaut BTS will soon be off to the military could be decided this week. According to a report in Korea Herald, the future of the group depends on the upcoming […]

Channing Tatum, Tom Hardy to star in the film based on Afghanistan evacuation : Bollywood News

[ad_1] Universal Pictures has acquired an untitled original pitch from American screenwriter-director George Nolfi, from the headlines fact-based drama about the Afghanistan evacuation. Magic Mike star Channing Tatum and Inception fame Tom Hardy are attached to star in the feature. According to Deadline, the story is based on recently reported true stories, this one focusing […]

[ad_1] American film director Martin Scorsese has been confirmed to make a musical biopic about the iconic rock band Grateful Dead. Jonah Hill is set to set as the frontman of the group Jerry Garcia. The musical feature will reunite Scorsese and Hill for the first time since 2013’s The Wolf of Wall Street. According […]